Toyama Prefecture and Kombu seaweed
In next two articles, we will talk about Toyama, the most kombu seaweed consumption prefecture in Japan. Japanese cuisine is best known for its food and uses of kombu seaweed and most familiar to it. Most amount consumption in Japan means the best in the world.
Toyama Prefecture is located by the Japan Sea but Kombu can not be harvested in this region. Then how did Toyama prefecture become the region with the most seaweed consumption in Japan. Let’s find out why.
Kombu began to distribute to market in Japan during Edo period when water transportation has grown. Cargo ship called “Kitamae ship” From Hokkaido to Japan Sea coastal area distributed different products to many ports all over in Japan.
Toyama prefecture (Ecchu at the time) was one of the anchorage ports and Kombu seaweed, Herrings, Salmon from Hokkaido was delivered to Toyama. In return, Toyama prefecture shipped rice; Sake, Soy sauce and medicines were loaded to the cargo to export to other cities. Thus, Even though Toyama prefecture did not produce kombu seaweed, kombu was familiar in their food culture. Kombu was used not only for dashi stock but as ingredients and many other unique ways of uses.
Route that was taken from Hokkaido to Toyama was part of so called kombu road. Kombu road reached all the way to China. 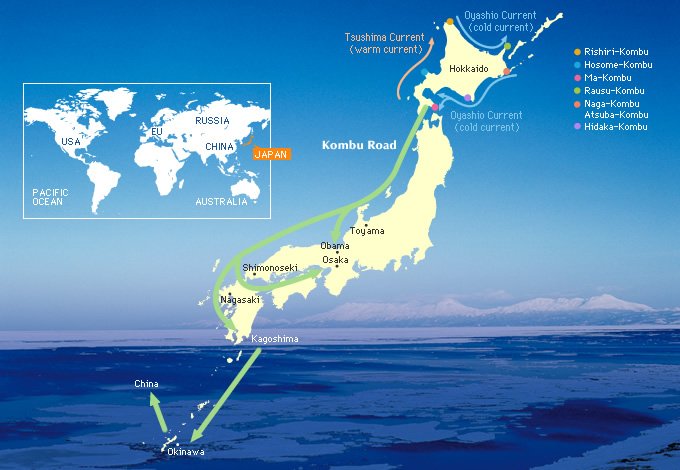 In next update, we will talk about unique ways of kombu uses in Toyama.